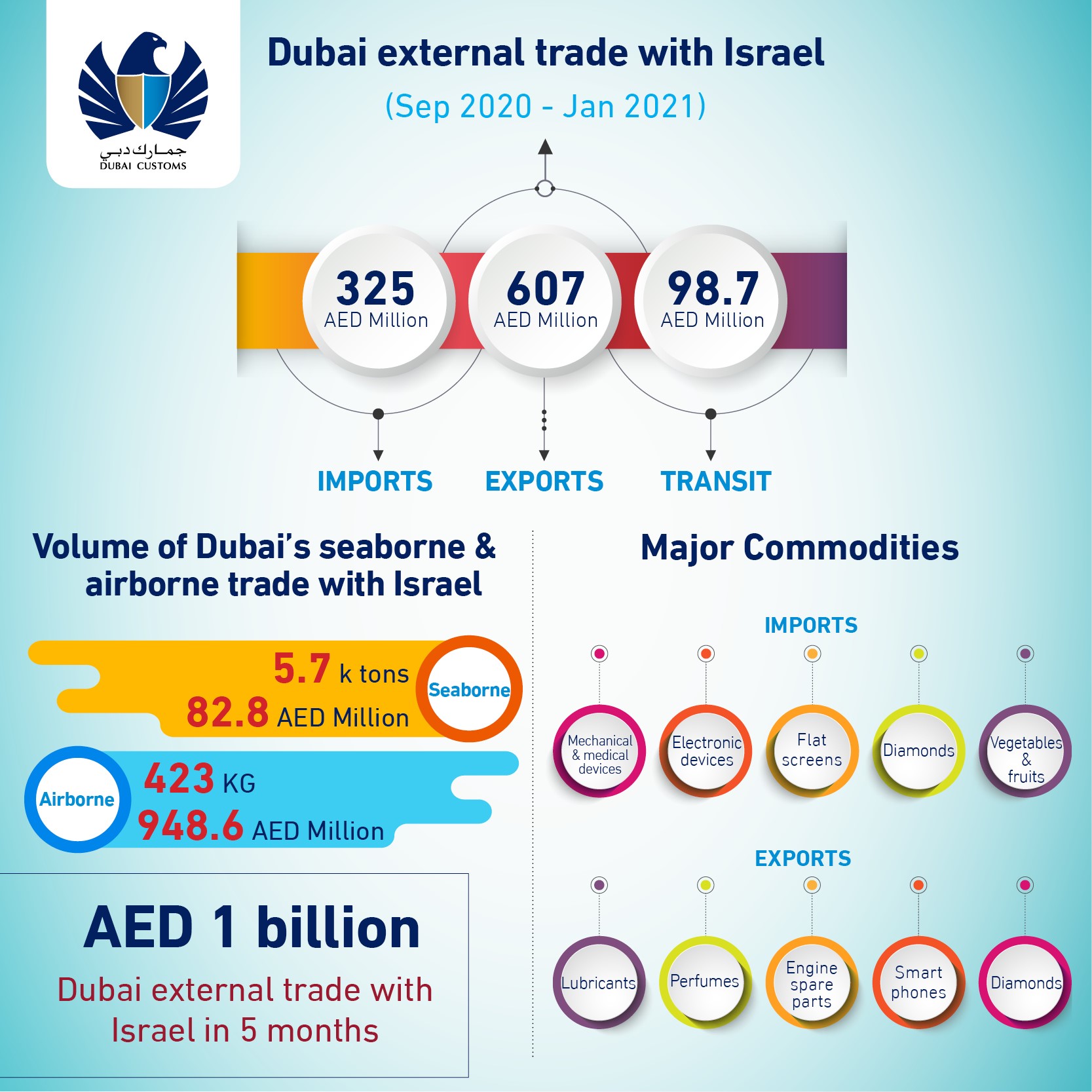 The start of the engagement between UAE and Israel is set to be a turning point in the economic and investment relationship between the two countries with mutual trade expected to grow to AED15 billion in the next few years, generating more than 15,000 jobs, said His Excellency Sultan bin Sulayem, DP World Group Chairman & CEO and Chairman of Dubai’s Ports, Customs and Free Zone Corporation.

In the light of this exceptional growth, HE Sultan bin Sulayem believes opening new markets and stimulating mutual trade between Dubai and Israel will encourage companies to increase production, leading to greater economic growth and more job creation.

“The expansion of trade and investment between the two sides will benefit not only the business communities in the UAE and Israel, but also other stakeholders and business communities in the Middle East. This growth supports the vision of His Highness Sheikh Mohammed bin Rashid Al Maktoum, Vice President and Prime Minister of the UAE and Ruler of Dubai, to forge closer cooperation and cross border partnerships with markets around the world,” said Bin Sulayem.

DP World signed an agreement with Israel’s Leumi Bank last September to facilitate trade and logistics services between the two sides, which will promote trade flows in the region. DP World also signed a series of cooperation agreements on cargo, port and free zone development with Israeli company Dovertower, as part of which they are launching a joint bid to privatise Haifa port. The agreement will enable DP World to contribute to facilitating trade between private businesses of the two countries. These agreements will also open a window for Drydocks World-Dubai to develop the Israeli dry docks and handle refurbishment projects.

Israel has expressed its interest in leveraging Jebel Ali Port as a re-export hub for Israeli products to enable it to easily access neighbouring fast-growing markets such as India, Pakistan, Bangladesh and Sri Lanka, which have a combined population of more than 2 billion.

HE Ahmed Mahboob Musabih stated that Dubai and Israel can both generate new growth opportunities by virtue of possessing exceptional competitive advantages that place them in a good position to promote win-win cooperation between each other’s business communities.

“Expo 2020 is a golden opportunity for Israel to introduce its services, products and opportunities to the world. We also look forward to Israel’s participation in the 5th WCO AEO Conference, to be organised by Dubai Customs in coordination with the World Customs Organization and the Federal Customs Authority. The event, expected to attract more than 2,000 customs, trade, AI, and e-commerce experts, will highlight the UAE’s status as a leading player in global trade.