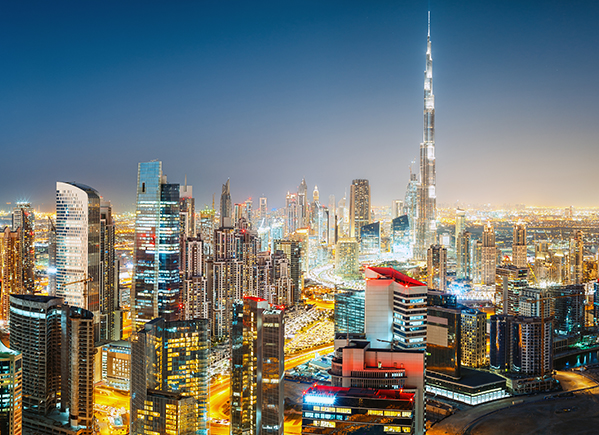 The Emirate of Dubai

The Emirate of Dubai

Dubai is one of the seven emirates that make up the UAE. It is located on the southeast coast of the Arabian Gulf. Located between 25°16′ North and 55°18′ East, Dubai stretches along the Arabian Gulf coast for 72 km and has a total area of 3,900 square kilometers. Dubai shares borders with Abu Dhabi in the south, Sharjah in the northeast, and the Sultanate of Oman in the southeast.

According to the 2013 census conducted by the Statistics Centre of Dubai, the population of Dubai is approximately 2,269,000. The emirate of Dubai has the highest population density in the UAE and enjoys rich cultural diversity with over 200 nationalities.

Dubai’s landscape is a combination of sandy desert and shallow shores and coral reefs. The waters of Dubai are home to more than 300 species of fish. Historically, the rich marine life of Dubai has provided its inhabitants with a considerable source of income.

Dubai Creek is one of Dubai’s major landmarks and has played an important role in the commercial growth of Dubai. Serving as a natural harbor, the Creek divides the city into two main sections; Deira and Bur Dubai.

Dubai is thought to have been established as a fishing village in the 18th century. In 1833, the Al Maktoum dynasty established the Emirate of Dubai, and Sheikh Maktoum bin Butti Al Maktoum became the Ruler of Dubai.

The Government of Dubai

In his capacity as Ruler of Dubai, Vice President and Prime Minister of the UAE His Highness Sheikh Mohammed bin Rashid Al Maktoum presides over the Government of Dubai.

The Council is responsible for drafting and overseeing the implementation of general policies of Dubai, taking necessary measures for the enforcement of federal laws, revising and approving draft laws and decrees before submission to the Ruler, preparing the annual budget of the Government of Dubai, developing and implementing Dubai’s strategic plans, establishing and organizing government entities and monitoring government performance.

Dubai is one of the world’s fastest growing cities and a global hub for commerce and business.

Due to its strategic geographical location and exceptional infrastructure, Dubai has emerged as a prominent city in global trade connecting the markets of the East and the West.

In addition to its highly efficient hard infrastructure, Dubai has established a robust soft infrastructure to serve the requirements of international businesses. Dubai’s economic policies and legislative framework have contributed to providing a highly attractive environment for international corporations. Home to more than 20,000 international companies, Dubai is leading the entire Gulf region to a new phase of economic prosperity.

Partnership with the private sector is one the main pillars of Dubai Government’s strategy for achieving sustainable economic development. Over the years, this partnership has facilitated the participation of local and international companies in the emirate’s growth and enabled the government to develop and maintain strong relations with business communities both within the country and across the world.

Apart from trade, tourism is another sector that is vital to Dubai’s economy. Dubai has effectively leveraged its natural attractions to bring growing numbers of tourists. To meet growing demand, Dubai has developed extensive world-class hospitality and tourism facilities. Dubai has a special focus on family tourism, and aims to be the world’s and the region’s family tourism capital.

Dubai is thought to have been established as a fishing village in the 18th century. In 1833, the Al Maktoum dynasty established the Emirate of Dubai, and Sheikh Maktoum bin Butti Al Maktoum became the Ruler of Dubai.

Dubai’s development projects are not limited to the economy. Guided by the leadership’s belief that human capital is the cornerstone of any civilization, the Government invests considerably in education, healthcare, culture and community development. The welfare and happiness of its people remain at the heart of Dubai’s strategic plans.