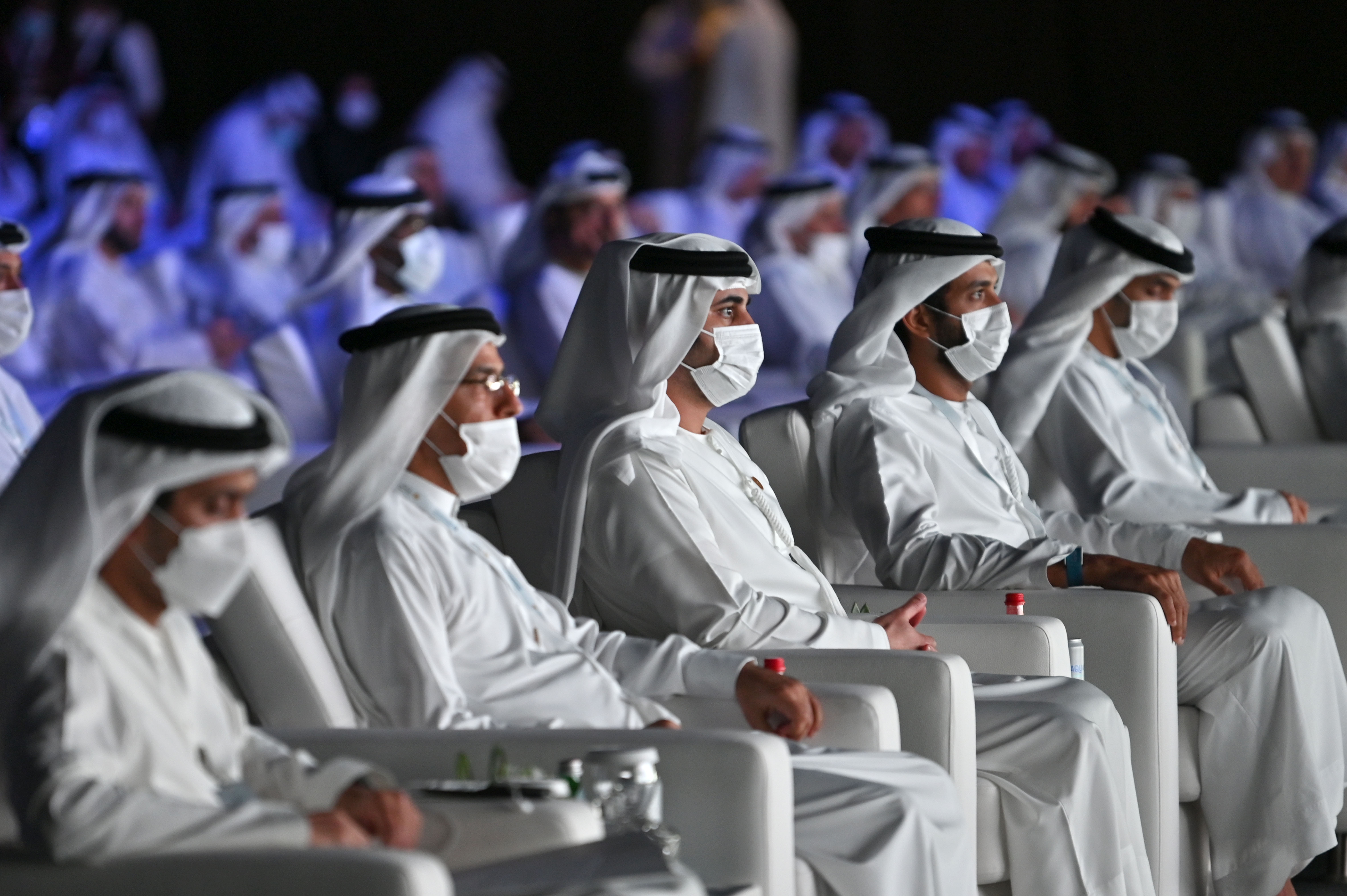 In line with the vision of His Highness Sheikh Mohammed bin Rashid Al Maktoum, Vice President and Prime Minister of the UAE and Ruler of Dubai, to transform Dubai into a vital player in global economic development and one of the smartest and happiest cities in the world, the Government of Dubai's Department of Finance (DOF) today announced a large portfolio of projects that will foster new partnerships between the Government of Dubai and the private sector.

The announcement was made in the presence of His Highness Sheikh Maktoum bin Mohammed bin Rashid Al Maktoum, Deputy Ruler of Dubai and Deputy Prime Minister and Minister of Finance, at the Dubai International PPP Conference being held at Expo 2020. The public-private partnership (PPP) project portfolio, worth more than AED25 billion spans several vital sectors. With the announcement, the total value of both existing and newly announced PPP projects in Dubai has exceeded AED65 billion.

His Highness Sheikh Maktoum bin Mohammed bin Rashid Al Maktoum, Deputy Ruler of Dubai and Deputy Prime Minister and Minister of Finance, said: “Dubai has set an example for the world in fostering productive partnerships between the public and private sectors to drive sustainable economic growth and the accelerated development of strategic sectors. The new portfolio of PPP projects seeks to further harness synergies between the two sectors to shape our future over the next 50-year phase in line with the directives of HH Sheikh Mohammed bin Rashid Al Maktoum, Vice President and Prime Minister of the UAE and Ruler of Dubai. Consistent with Dubai’s rising profile as a preferred global investment destination, the new projects provide private sector players with exceptional opportunities in vital sectors that are powering the long-term growth of the emirate. These projects will use innovative PPP mechanisms that create the ideal conditions for private sector companies to contribute to realising the vision for Dubai’s future.”

DOF revealed its portfolio of new PPP projects during the Dubai International Public-Private Partnership Conference (DIPPPC), which was opened this morning under the patronage of His Highness Sheikh Hamdan bin Mohammed bin Rashid Al Maktoum, Crown Prince of Dubai and Chairman of The Executive Council, at the Dubai Exhibition Centre at Expo 2020 Dubai. The portfolio includes more than 30 significant projects in the infrastructure, public transportation and urban development sectors. Also present during the announcement of the new projects were His Excellency Abdulla bin Touq Al Marri, Minister of Economy, His Excellency Dr. Thani bin Ahmed Al Zeyoudi, Minister of State for Foreign Trade and His Excellency Abdullah Al Basti, Secretary-General of The Executive Council of Dubai.

His Excellency Abdulrahman Saleh Al Saleh, Director General of DOF, welcomed participants to the conference, saying that the Government of Dubai has begun to outline the features for the next stage of innovation in financing vital government projects within the PPP ecosystem. "PPP has become the next global innovative trend for governments around the world seeking to finance their infrastructure and urban development projects," said Al Saleh.

"The government’s efforts led by DOF have helped create a solid foundation for building a comprehensive and integrated PPP system. DOF will continue to develop and consolidate these foundations in close cooperation with other government entities as well as private sector players who have the necessary capabilities and expertise and are keen to seize the opportunities Dubai has to offer," added the DOF Director General.

"The Dubai International Public-Private Partnership Conference represents a key initiative for generating new public-private partnerships that will help accelerate Dubai’s journey to the future. It paves the way for an exchange of ideas and insights between decision-makers in both public and private sectors and the exploration of new partnership opportunities. The event also promotes innovative financing methods for partnership projects among local and international investors," Al Saleh explained.

During his keynote speech, His Excellency Abdullah Al Basti, Secretary-General of The Executive Council of Dubai, enforced that the forward vision of the wise leadership and the strategic development plans are the fundamental in shaping the historical success of the emirate today. “We always hear about those who talk about inspiration and travel the world in search of new hope and ideas capable of defying time. The truth is, it requires no more than a look at what has been achieved by the vision of His Highness Sheikh Mohammed bin Rashid Al Maktoum, Vice President and Prime Minister of the United Arab Emirates, who has managed to successfully transform Dubai into a city that defies the impossible every day.”

His Excellency added: "As a result of this ambitious vision, strategic development plans, and the main role the private sector plays in civilization renaissance Dubai has built one of the most pioneering regional and international business models in partnership with the private sector, under the continuous support and directives of His Highness Sheikh Hamdan bin Mohammed bin Rashid Al Maktoum, Crown Prince of Dubai and Chairman of The Executive Council of Dubai.”

"It is not a coincidence that the private sector has chosen to partner with Dubai. The emirate has topped global indices for creating the most attractive business destinations in the world. It offers a competitive environment that facilitates growth for both regional and global businesses; flights to markets that exceed 5 billion people; and ports that possess a network of shipping lines that connect to various parts of the globe, providing a qualitative logistical advantage. In fact, DP World owns and operates 93 ports, and owns 127 companies across 60 countries worldwide. These key features have all contributed to the emirate’s solid foundation and the reason for which Dubai was ranked amongst the safest cities in the world during the pandemic, and a global reference in reactive and proactive policies that pave the way for greater successes.”

His Excellency also mentioned a number of successful projects that were achieved as a result of public-private partnerships, amongst which The Al Maktoum Bridge, which was established in the 1960s and was one of the historical projects within infrastructural development, and lately the launch of the Dubai Schools project, which will hold an investment of over 580 million dirhams in the coming years. These projects, in addition to many other strategic partnerships have shaped a qualitative leap in the development process across the emirate, which is aligned with Expo 2020 Dubai’s axes of mobility, sustainability and opportunities, such as: operation and maintenance of the Dubai Metro, Mohammed bin Rashid Al Maktoum Solar Park, independent power plant projects, in addition to Expo 2020 Dubai, the event that has brought the world back together in Dubai.

During the two-day DIPPPC, which concludes tomorrow, DOF is hosting a co-located exhibition featuring Dubai Electricity and Water Authority, Dubai Roads and Transport Authority, Dubai Municipality, and Dubai Health Authority. The four entities will present their proposed PPP projects to an international, regional and local audience of more than 600 decision-makers and officials from ministries, government entities, banks and companies working in the fields of investment, contracting, consultancy and infrastructure development.

Tomorrow, DIPPPC will focus on achieving the vision of the Government of Dubai to shape a dynamic PPP ecosystem by building a strong governance framework that can help generate sustainable financing for government development plans.

The first conference hosted by the Government of Dubai in the field of PPP, and the first-of-its-kind in the region, DIPPPC sheds light on global and regional opportunities and challenges facing infrastructure project financing and the important role played by the PPP ecosystem in achieving sustainability in project financing.