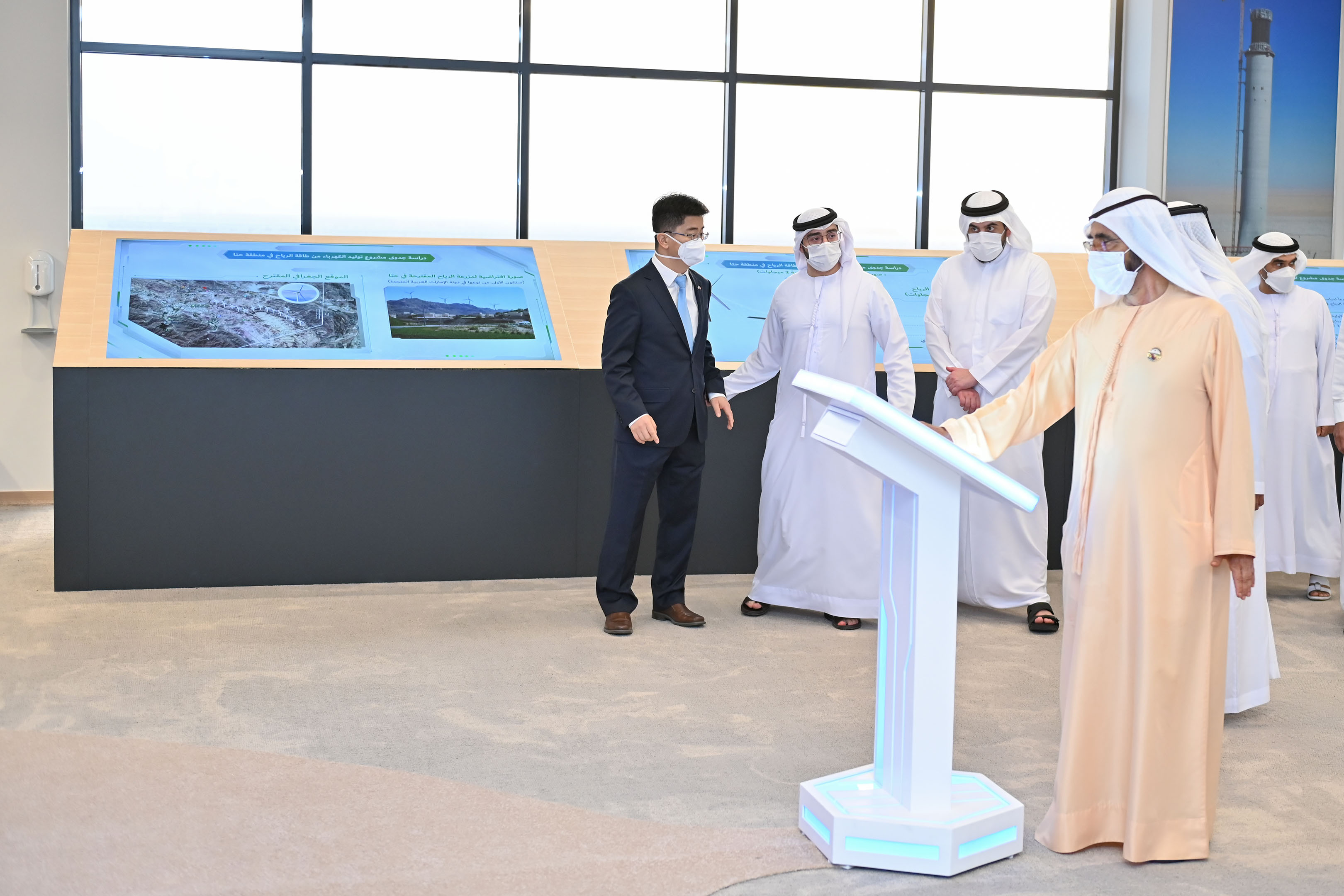 - His Highness also launched a project to study the feasibility of generating electricity from wind power in Hatta
- Fifth phase of the project features an investment of AED2.058 billion
Clean energy capacity in Dubai’s energy mix reaches 10% and will increase to 13.3% by 2021 end

His Highness Sheikh Mohammed bin Rashid Al Maktoum, Vice President and Prime Minister of the UAE and Ruler of Dubai, has inaugurated the 300 megawatt (MW) first stage of the 900MW fifth phase of the Mohammed bin Rashid Al Maktoum Solar Park. Implemented by Dubai Electricity and Water Authority (DEWA) using the Independent Power Producer (IPP) model, the solar park is the largest single-site solar park in the world with a planned total capacity of 5,000MW by 2030.

The Solar Park’s projects constitute one of the key pillars of the Dubai Clean Energy Strategy 2050, which aims to provide 75% of Dubai’s total power capacity from clean energy sources by 2050. The fifth phase investments amount to AED2.058 billion, according to DEWA.

His Highness was welcomed at the solar park by HE Saeed Mohammed Al Tayer, MD & CEO of DEWA and board members of the Dubai Supreme Council of Energy, including HE Dawood Al Hajiri, Director General of Dubai Municipality; HE Abdulla bin Kalban, Managing Director of Emirates Global Aluminium (EGA); HE Saif Humaid Al Falasi, CEO of Emirates National Oil Company (ENOC); and Nasser Abu Shehab, CEO of the Strategy & Corporate Governance Sector at the Roads & Transport Authority (RTA), in addition to Mohammad Abdullah Abunayyan, Chairman of ACWA Power; and HE Li Xuhang, Consul General of the People's Republic of China in Dubai.

In November 2019, DEWA announced the consortium led by ACWA Power and Gulf Investment Corporation as the Preferred Bidder to build and operate the fifth phase of the Mohammed bin Rashid Al Maktoum Solar Park using photovoltaic (PV) solar panels based on the IPP model. DEWA achieved a world record by receiving the lowest bid of USD1.6953 cents per kilowatt hour (Levelised Cost of Energy) for this phase. A total of 60 Requests for Qualifications (RFQ) were received from international developers.

To implement the project, DEWA established Shuaa Energy 3 in partnership with the consortium led by ACWA Power and Gulf Investment Corporation. DEWA owns 60% of the company, and the consortium owns the remaining 40%. The project uses the latest Solar photovoltaic bifacial technologies, which allows solar radiation to reach the front and back of the panels, with single-axis tracking to increase generation.
The fifth phase will provide clean energy to over 270,000 residences in Dubai, including 90,000 residences by the commissioned first stage, and will reduce 1.18 million tonnes of carbon emissions annually. To be commissioned in stages until 2023, the fifth phase uses the latest solar photovoltaic bifacial technologies with Single Axis Tracking to increase energy production.

HH Sheikh Mohammed bin Rashid Al Maktoum also launched a project to study the feasibility of generating electricity by utilising wind energy in Hatta. Based on field visits and available preliminary data on wind in Hatta, DEWA has identified the location for a wind farm with a total capacity of about 28MW. Actual wind speed for a full year is currently being measured at the location using a 150-metre metal tower. The purpose is to collect accurate data and study the total capacity of the power plant as well as other technical details in terms of number of turbines, capacity of each, annual operating hours, among other things.

“At DEWA, our strategy and plans are guided by the vision and directives of His Highness Sheikh Mohammed bin Rashid Al Maktoum to promote sustainability, innovation and the shift towards a green sustainable economy. The project to generate electricity using wind power is part of our efforts to diversify clean and renewable energy sources in Dubai. These include photovoltaic solar panels technology, Concentrated Solar Power (CSP), green hydrogen production using renewable energy, and pumped-storage technology in the hydroelectric power station in Hatta,” said Al Tayer.

“Commissioning the 300MW first stage of the fifth phase of the Mohammed bin Rashid Al Maktoum Solar Park increases DEWA’s total capacity of clean energy to 1,310MW. This brings clean energy capacity in Dubai’s energy mix to around 10%. DEWA’s production capacity has increased to 13,200MW of electricity and 490 million imperial gallons of desalinated water per day (MIGD). By the end of 2021, clean energy capacity will increase to 13.3% of Dubai’s total energy mix after adding 517MW from solar photovoltaic panels and CSP in the fourth phase of the solar park. These include 100MW from the world's tallest CSP tower at 262.44 metres, 200MW from first project of the parabolic trough, and 217 MW using photovoltaic solar panels,” added Al Tayer.

Al Tayer emphasised that DEWA's major project in cooperation with the private sector and using the Independent Power Producer (IPP) model contributes to the economic growth of the Emirate. Through this model, DEWA received the lowest solar energy prices (Levelised Cost of Energy) globally five consecutive times, making Dubai a global benchmark for solar power prices. DEWA has attracted investments of around AED40 billion from the IPP model.

Mohammad Abunayyan, Chairman of ACWA Power, said: "ACWA Power, a renowned Saudi company, is at the forefront of global efforts in progressing the energy transformation. Stemming from this notion, and based on our long-term strategic partnership with DEWA, the launch of the first stage of the fifth phase of the Mohammed bin Rashid Al Maktoum Solar Park has been completed in record time of less than twelve months. The milestone reached today stands testament to our commitment to fulfil our mission despite the challenges imposed by the pandemic, and reinforces our support of DEWA’s ambitious vision of strengthening the green ecosystem in Dubai and adopting innovative sustainable solutions. These solutions have already been demonstrated through our portfolio of projects that span 13 countries in three continents. We mark this occasion with great pride and would like to reiterate our commitment in supporting the development of pioneering sustainable development plans in Dubai.”

Ibrahim AlQadhi, CEO of Gulf Investment Corporation (GIC), said: "GIC is pleased to participate in the development of the Mohammed bin Rashid Al Maktoum Solar Park (Phase V) together with the Dubai Electricity & Water Authority and ACWA Power, and to achieve the commissioning of the first phase of this landmark project ahead of the target date despite the challenges caused by the COVID-19 outbreak.”

“GIC is a leading investor in energy projects with over $11billion in investments in the sector and intends to continue to play a major role in utilities projects in the Arabian Gulf region,” AlQadhi added. 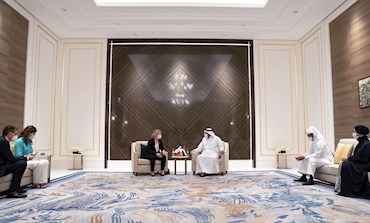 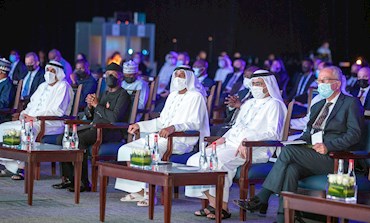