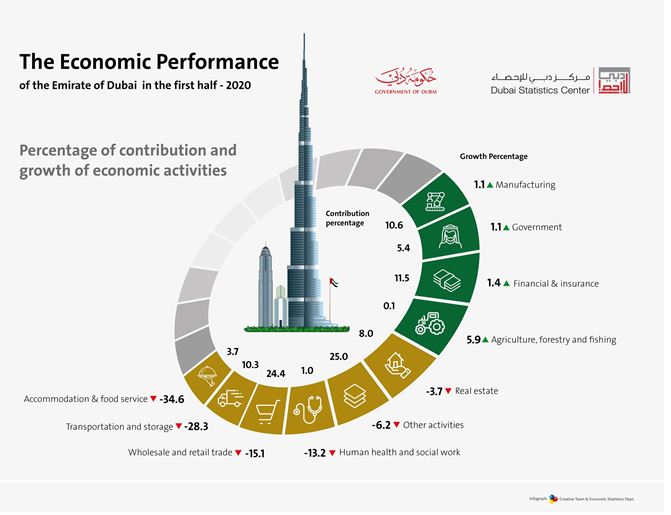 Sami Al Qamzi: Dubai is a bright example of an economy that has succeeded in protecting lives and securing livelihoods by limiting the impact of the COVID-19 pandemic

Since the onset of the COVID-19 pandemic, Dubai has responded with swift and effective health measures and economic support initiatives that protected lives and livelihoods. This has enabled the Emirate to contain the spread of the Covid-19 virus and its impact on the economy, and paved the way for a quick recovery. The comprehensive preventive and support measures were implemented following the directives of His Highness Sheikh Mohammed bin Rashid Al Maktoum, Vice President and Prime Minister of the UAE and Ruler of Dubai, and the close follow-up of HH Sheikh Hamdan bin Mohammed bin Rashid Al Maktoum, Dubai Crown Prince and Chairman of The Executive Council of Dubai whose leadership of the crisis became a global role model for combating COVID-19.

Following the outbreak of the pandemic, Dubai Government stepped up its efforts in monitoring market conditions and communicating with the private sector and the broader community. The Government adopted strong precautionary protocols to safeguard public health and ensure business continuity. This approach enabled a faster return to normal life and the resumption of economic activity in record time on the basis of real time data and analysis.

HE Sami Al Qamzi, Director General of Dubai Economy stated: "Our leadership’s directives were focused on ensuring that the short-term impact of the COVID-19 pandemic does not translate into a long-term economic hardship that would inflict lasting damage on people and businesses by way of job losses and bankruptcies." This has paved the way for Dubai to be one of the very first cities to gradually reopen its markets and businesses. Under the directives of HH Sheikh Mohammed bin Rashid Al Maktoum, Dubai was a pioneer in launching initiatives to overcome challenges faced by individuals and businesses, which had a significant positive impact on minimizing the economic impact of the pandemic, His Excellency added.

Dubai Economic Outlook 2020-2021
During the period between March and October this year, the Government of Dubai launched four stimulus packages with the objective of mitigating the impact of confinement measures in the Emirate, on the demand side, covering consumption, investment, trade and travel, as well as on the supply side including the workforce, supply chains and the cost of doing business. The initiatives, worth around AED6.8 billion, helped offset the shock and repercussions in the form of job losses or disruptions to businesses.

According to a recent study by Dubai Economy, Dubai’s stimulus packages contributed to reducing the economic impact of the crisis by limiting the expected economic contraction to -6.2% in 2020, a decline that is in line with the growth outlook of countries around the globe as reported by the International Monetary Fund (IMF, Table 1).

The precautionary and preventive measures adopted to contain the COVID-19 pandemic in Dubai, along with travel restrictions around the world, had a severe impact on hotels and restaurants, which are expected to see a contraction of -20% in 2020 (Figure 1). Also affected were the transport and storage sector (-11 %), and the retail and wholesale trade sector (-9%). 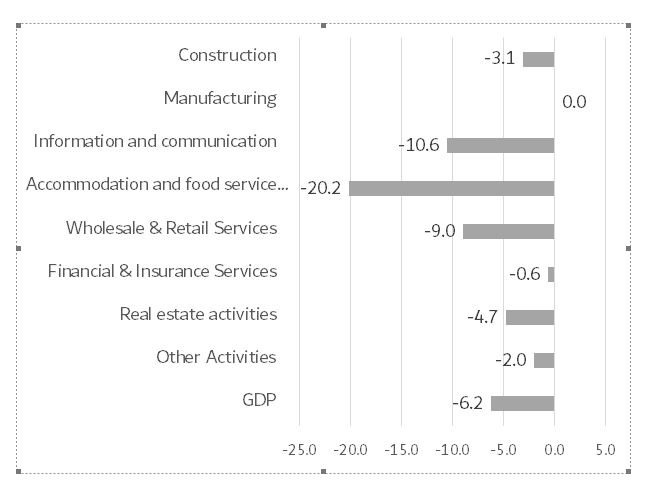 The Government of Dubai and its Future Foresight project have laid strong foundations for a rapid recovery. The support measures launched during the pandemic were designed to contribute substantially to the ongoing economic recovery efforts. Al-Qamzi explained: “These efforts include investment in healthcare and food security that will not only reduce the likelihood of future shocks, but also contribute to enhancing the Emirate's resilience against such shocks.” Al-Qamzi added that the continued flow of local and foreign investments, whether from the government or private sector, are supporting the Emirate’s efforts in achieving sustainable growth and a rapid transition to a knowledge-based economy. The Cabinet Resolution No. (16) for the year 2020 issued last November listing a set of economic sectors and activities in which 100% foreign ownership is allowed, supports efforts to attract FDI into the UAE.

In addition, HH Sheikh Hamdan bin Mohammed bin Rashid Al Maktoum launched the ‘Nasdaq Dubai Growth Market’ in October 2020 to assist emerging companies and small and medium enterprises in attracting investors and financing their projects through an initial public offering (IPO). The move will support not only local businesses, but also companies from different parts of the world, enabling them to expand in the region and internationally.

Dubai also launched a ‘Virtual Work Program’ in October 2020, offering overseas’ professionals the opportunity to work remotely using Dubai as a residential base so that they can benefit from its safe and high-quality working and living environment. The program complements the golden visa for long-term residency permits launched in 2019 that allows foreigners to live, work and study in the UAE without the need for an Emirati sponsor and hold 100% ownership of their businesses in the UAE. The golden visas can be issued for a period of five or 10 years and renewed automatically.

The ongoing initiatives, in addition to the Expo 2020 scheduled to be hosted next year, will drive increased investment inflows and job creation in the coming years.

HE Sami Al Qamzi also revealed the results of a recent study by Dubai Economy, which estimates growth to accelerate to 4% in the emirate by 2021 taking into account prevailing conditions and the outlook for the global economy.

The economic impact of confinement measures in the first half of 2020
Preliminary reports issued by the Dubai Statistics Centre show a 10.8% decline in the emirate’s economy in the first six months of 2020. Arif Al Muhairi, Executive Director of Dubai Statistics Centre, said this decline is within the expected range of economic contraction, given the massive global economic impact of the COVID-19 pandemic, especially in the first half of the year. The critical priority placed on combating the pandemic and protecting public health and safety induced a widespread slowdown. As with countries around the world, various confinement measures, such as curfews and closures of businesses, had a major impact on economic activities.

The Dubai Statistics Centre data also show that activities related to cross border transactions were the most impacted by the overall decline in H1 2020. These activities accounted for 85.4% of the total decline and included sectors such as trade, transport, hospitality and food, which were severely hit by the closure of international borders and curbs on travel and tourism. Foreign trade also suffered as cargo movement was restricted by closure of borders and airports.

Trade, transport and storage in general saw a decline in H1 2020 compared to the same period with trade activity alone decreasing by 15.1%. Despite the decline, trade remained the largest contributor to the emirate’s economy, with a 24% share. The decline largely coincided with the gradual closure that began in mid-March and continued until June. Transport and storage activity decreased by 28.3%, pulling the emirate's economy down by 3.6 percentage points, as flights and airports came to a standstill and broad demand for transport weakened during the National Disinfection Program and related closure. However, despite the decline, transport and storage activity made a substantially high contribution of 10.3% to the emirate’s economy.

DP World handled 18.3 million twenty-foot equivalent units (TEUs) across its global portfolio of container terminals in Q3 2020. Total handling volumes increased by 3.1% year-on-year, and 1.9% on a like-for-like basis. During the first nine months of 2020, DP World handled 52.2 million TEUs, a decrease of 2.5%, on the basis of announced reports, and a decrease of 2% on a like-for-like basis. The growth in total container volumes on a comparable basis was mainly driven by strong performances in Europe, the Middle East, Africa and the Americas. The recovery in total volume is due to several factors including a 10% increase in productivity on a quarterly basis as global economies began to ease lockdown restrictions. India, which suffered from a sharp slowdown in Q2 2020, also witnessed a significant improvement in the volume of handling compared to Q2. The Jebel Ali Port in the UAE also achieved a growth of 3.4% compared to the previous quarter in tandem with the recovery and stabilization of the regional commercial activities.

The Dubai Statistics Centre data also show a decrease of 34.6% in activity in the hospitality and food services (hotels and restaurants) during H1 2020 compared to the same period in 2019. Though the decline pulled the Dubai economy down by 1.7 percentage points, the sector contributed 3.7% to it. The decline, part of a global trend, was largely expected due to the complete cessation of foreign and domestic tourism and the strict safety procedures, including complete closures of establishments operating in these sectors.

Certain health-related activities witnessed a decline of 13.2% in the first half of 2020, which can be attributed to changing healthcare priorities and suspension of specialized activities and services to focus on crisis management and counter-pandemic measures.

Real estate activities also witnessed a decline of 3.7%. The sector contributed 8% to real GDP and an added value of approximately AED15 billion in H1 2020. The drop in residential rental prices and margins achieved from the sale of real estate units were the major reasons for the decline.

Financial and insurance activities flourish
Financial services and insurance activities saw a new phase of growth during the pandemic, growing 1.4% and pushing the emirate’s overall economy positively by 0.1 percentage points. The sector also enhanced its contribution to the emirate’s economy to 11.5% in the first half of 2020. HE Arif Al Muhairi, remarked that the banking sector in the country is in a strong position to face any future challenges as data from the Central Bank show that the UAE banking system remained active in financing and extending credit in H1 2020.

Businesses as well as individuals were supported by banks in the UAE during the crisis period. Bank credit to residents in general rose by 5.5% by the end of the first six months of 2020 compared to the same period in 2019, and data indicated a 52% growth in financing for transport, storage and communications activity, and 19% in personal finance for business purposes. Financing for food industries grew by 10%, for chemical industries by 15%, and for agricultural activity by 9%, confirming the importance of the banking sector in supporting vital economic activities in the UAE.

Dubai International Financial Centre (DIFC), the leading financial centre in the Middle East, Africa and South Asia, continued to lead the future of the financial sector in the region during H1 2020, reaching the highest rate of company registration in light of its continuing work with its partners to overcome the impact of COVID-19. DIFC revealed that 310 new companies joined its lists during H1 2020, an increase of 25% compared to the same period last year, bringing the number of active companies in DIFC to 2,584, representing a major achievement, especially during COVID-19. This achievement comes as the financial sector and the related innovative sectors continue to place their trust in Dubai as the leading financial hub and preferred financial technology centre in the Middle East, Africa and South Asia.

Productive activities (agriculture, mining, and industry), which are critical to securing the needs of residents and businesses, grew by 1% in the first half of 2020. These sectors remained active under close monitoring and stringent observance of precautionary measures.