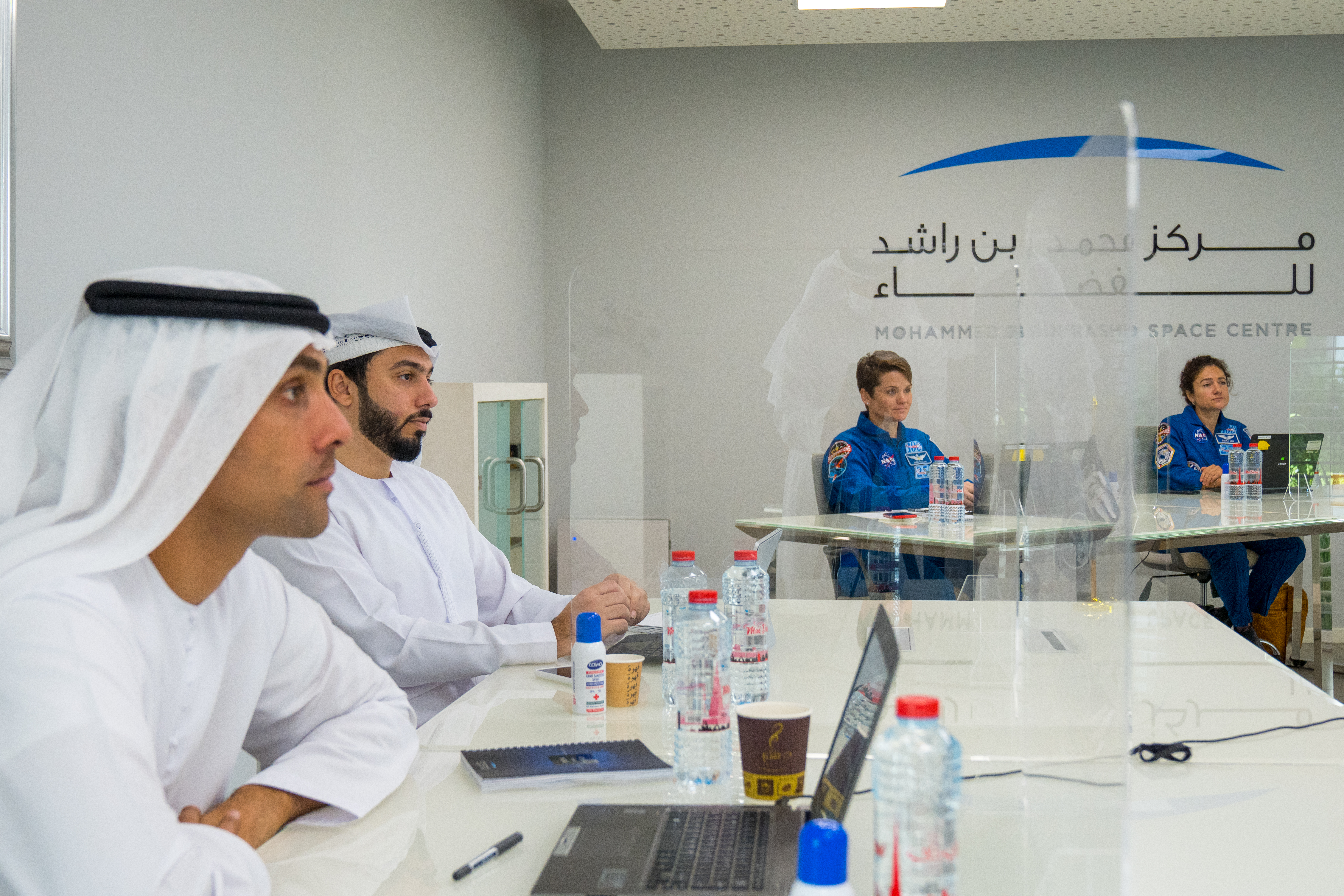 14 Candidates qualify for final phase of second batch of the UAE Astronaut Programme
New batch of astronauts set to be announced in January 2021.

The Mohammed bin Rashid Space Centre (MBRSC) today announced that 14 candidates have qualified for the final phase of the second batch of the UAE Astronaut Programme, which aims to train and prepare a team of Emiratis for scientific space missions, as part of the UAE’s National Space Programme. The selected candidates will now undergo final interviews conducted by a committee consisting of specialists from MBRSC, including Emirati astronauts Hazzaa AlMansoori and Sultan AlNeyadi along with NASA astronauts Anne McClain and Jessica Meir.

Phase one: IQ, personality, and technical assessments
A total of 4,305 applicants applied for the second batch of the UAE Astronaut Programme, a 7 percent increase from the first batch. The list was filtered down to 2,099 applicants based on their age, educational background, and scientific research experience. The applicants then underwent IQ, personality, and technical assessments, after which the best 1,000 candidates were selected.

Phase two: Virtual assessments
After evaluating the top 1,000 candidates, the MBRSC evaluation committee selected 122 applicants, who were then interviewed virtually. Based on the interviews, the 122 candidates were further evaluated, bringing the shortlist down to 61 applicants.

MBRSC announced that it is in the process of completing the final interviews with the shortlisted 14 candidates. Those who pass the final interview phase will undergo a final evaluation process consisting of interviews conducted by a committee of specialists at MBRSC, after which the two final candidates for the second batch of the UAE Astronaut Programme will be selected.

HE Yousuf Hamad AlShaibani, Director General, MBRSC, said: "We have reached an important stage in the programme to select the second batch of Emirati astronauts. They will participate in scientific space exploration missions in partnership with international astronauts, which serves the aspirations of the country to participate in global space missions.”

"The final phase of assessments by Emirati astronauts Hazzaa, Sultan and NASA astronauts adds another dimension to the programme and increases the efficiency of the evaluation process. We are constantly strengthening strategic partnerships with global partners as they bring a wealth of knowledge and expertise to Emirati astronauts. At the same time, it also highlights the Centre's role in strengthening its links with specialised international entities such as NASA and building bridges of cooperation between leading global space organisations and agencies."

The shortlisted 14 candidates include nine men (64%) and five women (36%) from across the UAE. The average age of the applicants is 31 years, with the youngest candidate 24 years old and the oldest 38 years. The applicants have diverse educational backgrounds, with nine of them holding a bachelor’s degree, four a master’s degree and one with a doctorate degree. In terms of professional backgrounds, nine candidates were from the engineering sector, four from the aviation sector and one from metrology.

Salem AlMarri, Assistant Director General for Scientific and Technical Affairs and Head of the UAE Astronaut Programme, MBRSC, said: “MBRSC seeks to prepare national cadres who can contribute to knowledge sharing in the space sector. This will further equip the space sector with trained and expert personnel who will enable us to participate in future space exploration missions.”

"The goal of the UAE Astronaut Programme is to establish a sustainable programme for the coming years. The evaluation process that the 14 candidates will undergo is a pivotal stage for us to choose the best among them to join the current team and strengthen the Emirati astronaut cadre. This will help establish an integrated national team in preparation for scientific research and tasks in space for the benefit of humanity."

The two astronauts from the second batch of the UAE Astronaut Programme will also join the ‘2021 NASA Astronaut Candidate Class’, as part of a joint strategic agreement between the UAE and the United States of America, to train them at NASA's Johnson Space Center. The new astronauts will undergo a training plan within the UAE to ensure that they are ready to train with NASA astronauts.

The UAE Astronaut Programme is one of the projects managed by the UAE’s National Space Programme and funded by the ICT Fund of the Telecommunications Regulatory Authority (TRA), which aims to support research and development in the ICT sector in the UAE and promote the country’s integration on the global stage.