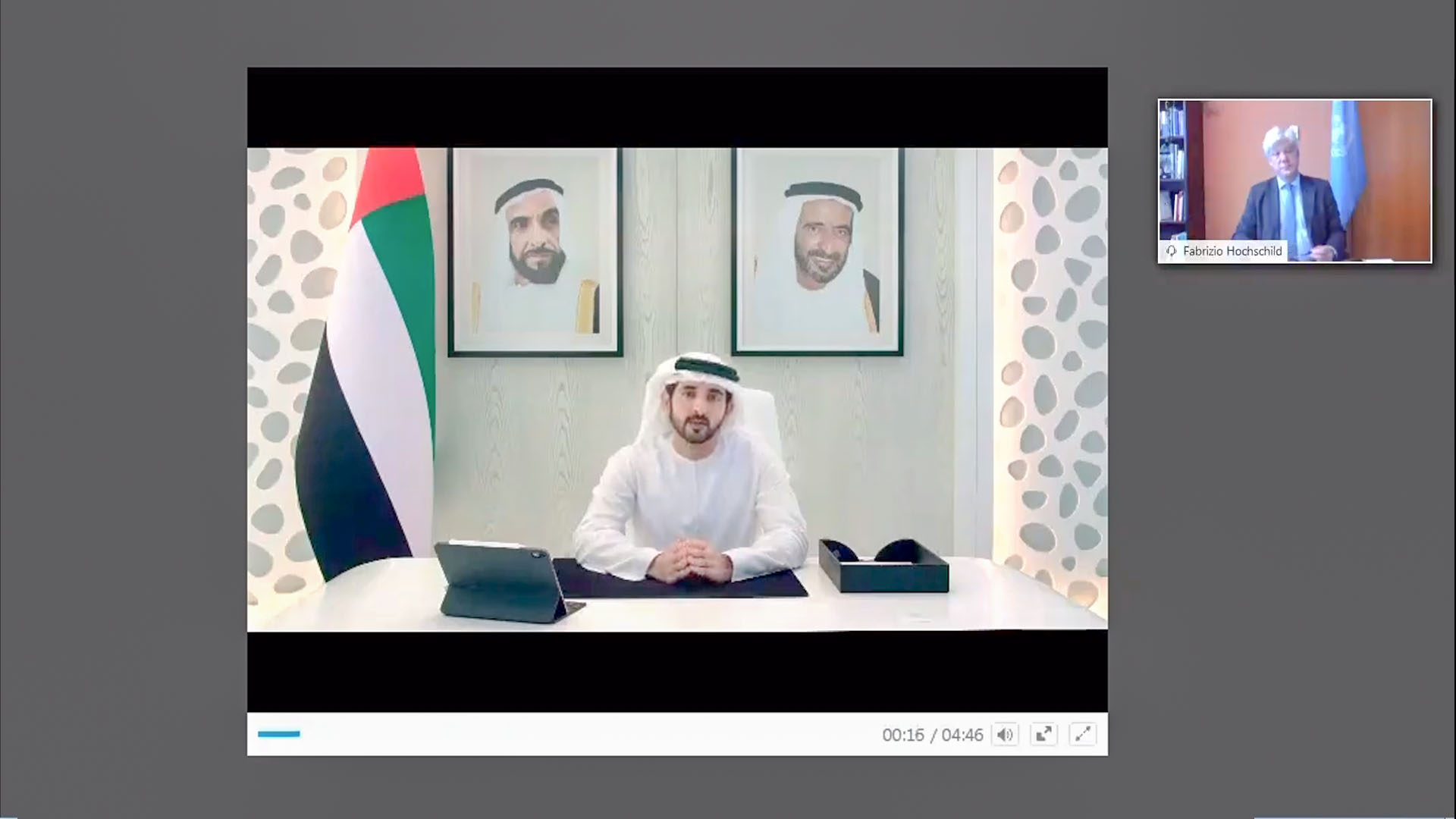 His Highness Sheikh Hamdan bin Mohammed praised the UN’s efforts to unite the international community with the aim of creating a better future for the world, and emphasised the UAE’s commitment to all international initiatives that seek to build bridges between countries and communities, as well as harness digital technology to serve people.

The virtual event to launch the new initiative was attended by the UN Secretary-General Antonio Guterres, President of the Swiss Confederation Simonetta Sommaruga, President of Sierra Leone Julius Maada, and a number of prominent international officials.

Sheikh Hamdan said the UAE is committed to boosting collaboration and knowledge sharing to achieve sustained and accelerated development, as well as enhance constructive international dialogue to benefit from opportunities in various sectors, with a focus on vulnerable communities and those that face obstacles due to the lack of technology and technology infrastructure.

His Highness also stressed on the importance of preparing for future changes, adding that the UAE Government, under the leadership of Vice President and Prime Minister of the UAE and Ruler of Dubai His Highness Sheikh  Mohammed bin Rashid Al Maktoum, is ready to share its expertise in developing the region’s most advanced digital government operations with the international community.

HH Sheikh Hamdan delivered the keynote address as part of the virtual high-level event on “The State of The Digital World and Implementation of the Roadmap for Digital Cooperation”.

“The Roadmap initiative will boost digital collaboration between governments and encourage the support of the private sector and international organisations, as well as individuals around the world,” His Highness said. “The UAE is committed to any initiative that promotes international dialogue, as it is a key supporter of the UN,” he added.

“In the last three months, the world has witnessed a phase in history that will be discussed in history books. We have witnessed tremendous challenges and vast progress at the same time and we have all seen the problems of not making our government systems and policies agile and ready for any upcoming disruption whether it is good or bad,” His Highness said. He stressed the importance of investing in the future, saying, we need to “invest in what is to come, not what is already here.”

The UAE Government under the leadership of His Highness Sheikh Mohammed bin Rashid Al Maktoum has continuously invested in digital transformation over the last 20 years, which enabled us to continue operations 100% in the public sector through virtual means, His Highness said. “This pandemic has proven that we cannot work separately or individually, and there is no country that will be better off working alone. There is no better time to build bigger and more flexible bridges than today,” said His Highness.

“More than 46% of global communities lack access to the internet. We have to accelerate efforts to increase internet access to half the globe. There are many opportunities to promote digital collaboration and push it forward in various sectors,” His Highness said.

His Highness also shared the UAE’s experience with attendees. “In the UAE, we are keen to adopt changes and promote rapid development. We have adopted a unique approach to plan for the future. We know that the world will go through radical changes, and that we need to speed up our development journey.”

“We can build the future by harnessing digital collaboration. Technological development won’t happen without collaboration between all members of the international community.”

During the event, UN Secretary-General António Guterres said the world is shifting to digital technology at a faster pace than people could ever have predicted.  This creates both vast promise and some peril.

“Technology is enabling the lifesaving work of health-care providers, allowing businesses to operate remotely, educating our children and connecting us with friends and family.  But we also have seen technology gravely misused.  Hate speech, discrimination and abuse are on the march in digital spaces,” Guterres said.

The President of the Swiss Confederation, Simonetta Sommaruga underlined the importance of digitisation and why it must be put at the service of all individuals. To achieve this aim, humanity must establish a set of common rules and regulations to ensure that all children are connected.

The President of Sierra Leone, Julius Maada Bio said, “The opportunities and challenges of digital technology in general show us the need for international cooperation. Digital citizenship must be adopted in all countries. This roadmap will make our world and the world of our future generations better.”

Klaus Schwab, Executive Chairman of the World Economic Forum (WEF), said, “Today we have an increasingly urgent need to boost digital collaboration globally, and if we do not quickly address the challenge of achieving high-quality global internet access for everyone, we will not be able to build inclusive economies or achieve our sustainable development goals.”

The "Roadmap for Digital Cooperation" reviews the current digital landscape as it deals with the repercussions of the current crisis of the novel coronavirus pandemic, and the new reality it has imposed on various sectors, which requires reconsideration of all existing frameworks and systems. The Roadmap also discussed the urgent need to build an international digital cooperation system that ensures technological equality, especially in less privileged societies, by utilising the experiences of digitally developed countries.

The UAE's participation in the launch of the Digital Cooperation Roadmap highlights its role as a member of the Secretary-General’s High-Level Panel on Digital Cooperation, which is considered a global recognition of the UAE's leading role in the field of digital cooperation and smart cities in the region. The panel considers the UAE as an inspiring experience for countries in the region and the world.

The High-Level Panel on Digital Cooperation was convened by the UN Secretary-General in July 2018 to advance proposals to strengthen cooperation in the digital space among governments, the private sector, civil society, international organisations, academia, the technical community and other relevant stakeholders.

The Panel was tasked with raising awareness about the transformative impact of digital technologies across society and the economy and contributing to the broader public debate on how to ensure a safe and inclusive digital future for all, taking into account human rights norms.

Mohammed Al Gergawi, UAE’s Minister of Cabinet Affairs and the Future, was chosen as a member of the High-Level Panel on Digital Cooperation, which is co-chaired by Melinda Gates, Co-Chair of The Bill & Melinda Gates Foundation, and Jack Ma, Executive Chairman, Alibaba Group.

The UAE is one of the leading countries that supports international cooperation in the field of technology. It is one of the region’s pioneers in implementing digital technology in its government system on a large scale, and adopts long-term economic diversification plans in line with the UAE Centennial 2071. The UAE also has one of the highest rates of mobile phone use and internet penetration in the region, making it a living future laboratory for advanced technologies.