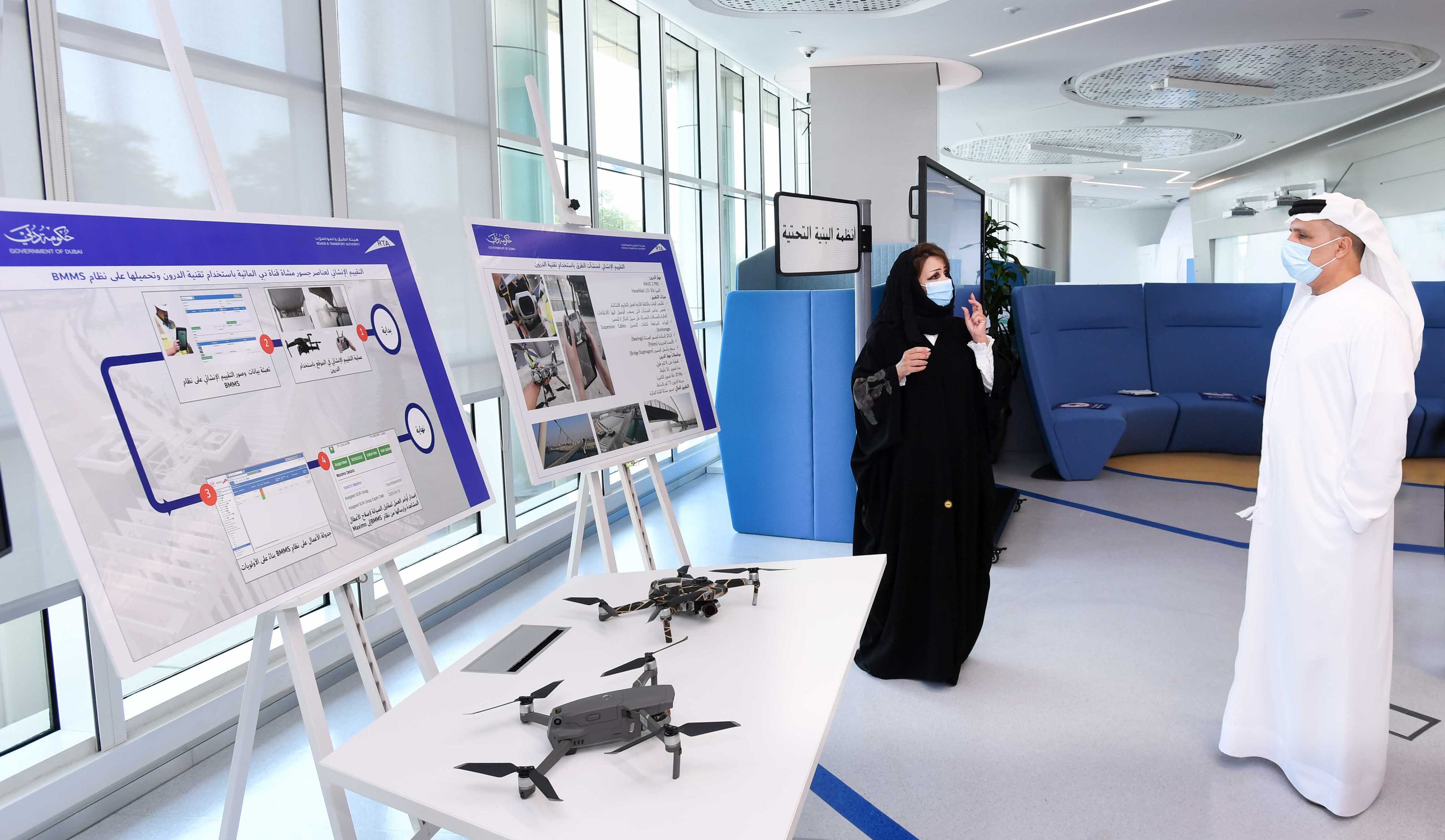 His Excellency Mattar Mohammed Al Tayer, Director-General and Chairman of the Board of Executive Directors of Roads and Transport Authority (RTA), endorsed a package of smart initiatives for improving and sustaining RTA’s services. Initiatives unveiled contribute to sustaining the use of RTA assets, such as roads and bridges, and improve drivers and vehicles licensing services, which will improve the quality of customer services and enhance the training and qualification of drivers, and will translate into improved traffic safety levels.

To this effect, Al Tayer held two separate meetings with CEOs and Directors of Traffic and Roads Agency and the Licensing Agency of RTA. The first meeting reviewed an initiative for the deployment of drones in monitoring maintenance works, which was used in inspecting the structural components of pedestrian bridges crossing over the Dubai Water Canal and elevated structures. Drones inspection cuts short the time and cost of assessing constructional elements, and enables the inspection of hard-to-reach areas of installations, such as suspension cables, and bridge bearing.

Al Tayer reviewed the smart surveillance systems installed inside bridge bearing. The system consists of sensors inserted in bridge pillars to monitor and measure loads as well as the surrounding environmental conditions. The system facilitates the monitoring of bridge movement and the conditions to which it might be exposed throughout its lifecycle. Monitoring the movement of bridges gives an early notification to maintenance engineers who will be able to verify if the bridge is exceeding the designed loads and settlements to which pillars are vulnerable under different conditions. As such, the process contributes to taking appropriate and timely maintenance measures and reducing associated costs.

In a meeting with the Directors of Licensing Agency, Al Tayer reviewed the performance indicators of the Agency over the first five months of 2020. It was reported that the number of active driving licenses in Dubai amounted to 2.5 million driver licenses, and the number of registered vehicles clocked 1.83 million vehicles. The Agency processed 2.447 million transactions comprising of 1.6 million vehicle-licensing transactions, 760 thousand driver-licensing transactions, and 4,300 non-objection transactions for commercial activities. The number of digital transactions processed increased from 59% in December 2019 to 69% in April this year. The proportion of using smart applications leapfrogged from 5.3% in March to nearly 30% in April this year.

Al Tayer viewed a presentation about the driver-testing vehicle deployed as part of the smart route system; a futuristic project based on the use of information telecommunication technology (ITT) in vehicles. Such vehicles are fitted with smart sensors and GIS enabling them to monitor driver license trainees on-road tests. The project has the potential to improve traffic safety and the quality of drivers licensing service besides enhancing the implementation of governance and transparency in tests and automating the entire process.

The project employs numerous advanced technologies such as artificial intelligence, internet of things, advanced co-driver assisting systems, GIS, face-recognition technology, and 3D panoramic imaging. The system was installed in 250 vehicles, which carried out 43,828 tests at 16 driving institutes during the first quarter of this year. The project reduced the time of retrieving records by as much as 75%, cut accident-reporting time by 75% as well, and saved the printing of 60,000 papers.

Al Tayer was briefed about the system for booking dates for vehicle licensing and testing through Dubai Drive app. He was also acquainted with an update of vehicle safety service enabling subscribers to rate the performance of companies, drivers, geographic tracking and the vehicle information.

The project will reduce the average number of visits to drivers licensing centres from 14 to zero visit, cut the carbon footprint from 18,000 tons to zero, and increase the number of service delivery channels from three to six channels. It also supports the paperless government strategy by saving the printing of four million papers.

Al Tayer stressed on the need to broaden the scope of smart transformation across RTA operations such that all customer transactions can be processed without seeking the support of employees of service centres. He called for the use of artificial intelligence, big data and blockchain technologies to improve services to customers and make them happier.

“We have to benefit from RTA’s experience of providing customer services during the lockdown of Covid-19 pandemic, identify the points of strengths and develop solutions to issues encountered in the processing of certain transactions. We need to step up RTA’s preparedness to emergencies and adopt advanced technology practices to meet the present needs and cope with future challenges.