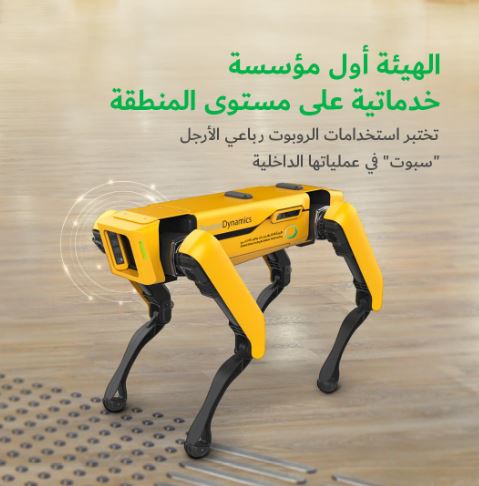 Dubai Electricity and Water Authority (DEWA) has started testing the different uses of the four-legged Spot Robots in its internal operations, becoming the first utility in the region to use this robot, developed by Boston Dynamics that is specialised in making robots. The move supports DEWA’s strategy to use the latest Fourth Industrial Revolution technologies and adopting Artificial Intelligence (AI) in its different operations.

“We work in line with the vision of His Highness Sheikh Mohammed bin Rashid Al Maktoum, Vice President and Prime Minister of the UAE and Ruler of Dubai, to make Dubai a city of the future, and the directives of His Highness Sheikh Hamdan bin Mohammed bin Rashid Al Maktoum, Crown Prince of Dubai and Chairman of the Executive Council of Dubai, to transform the Government of Dubai into a fully digital government. Adopting the Spot Robots in DEWA’s internal operations is part of our strategy to use the latest AI and robotic technologies. This contributes to achieving the UAE Strategy for the Fourth Industrial Revolution, which aims to strengthen the UAE's position as a global hub for the Fourth Industrial Revolution, and increase its contribution to a knowledge-based national economy that depends on innovation and future technological application. It also supports the Dubai 10X initiative, which mandates the Government of Dubai to become a global leader that is 10 years ahead of all other cities through government innovation and reshaping traditional work mechanisms,” said HE Saeed Mohammed Al Tayer, MD & CEO of DEWA.

DEWA is one of the most innovative organisations worldwide. Through Digital DEWA, its digital arm, DEWA is disrupting the entire business of public utilities by becoming the world’s first digital utility to use autonomous systems for renewable energy and storage while expanding the use of AI and digital services. Dubai will be the first city to provide AI-based electricity and water services.